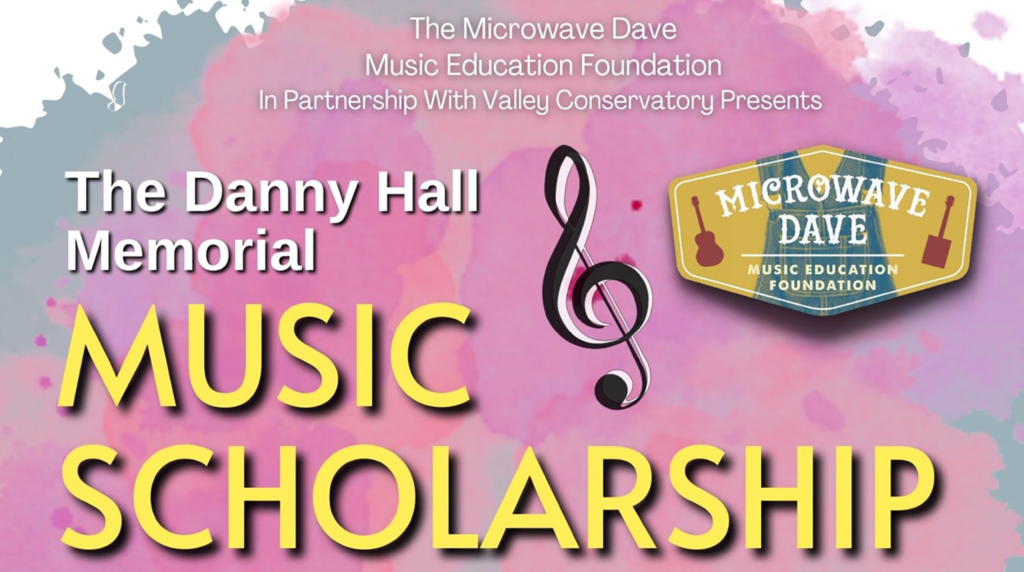 The Microwave Dave Music Education Foundation (MDMEF), a non-profit 501(c)(3), works with local musicians, educators and music teachers to support and promote music education in North Alabama. Each year, MDMEF selects two recipients to be awarded the Danny Hall Memorial Scholarship. Through this scholarship program, MDMEF hopes to assist and foster talented young musicians, enabling them to progress in their craft as well as in life. The scholarship pays tuition for one year of music lessons at Valley Conservatory, and is awarded to deserving area youth musicians who could benefit from expert tutoring and financial assistance.

***Applicants are required to complete the online form, provide two letters of recommendation, and submit a recorded video audition performing two separate pieces of music. The 2023 application process will open on September 5th, 2022 and close no later than November 4th, 2022. ***

All submissions will be judged by the scholarship committee, and recipients of the 2023 Danny Hall Memorial Scholarship will be announced no later than December 2nd, 2022. Applicants are encouraged to resubmit for the following years’ selection process, if they are not selected for the current year music lessons.

Details such as the start date and time for the lessons will need to be coordinated with the school, and will run through the calendar year from January to December 2023. MDMEF will make payment to the school directly when lessons begin.

At the request and suggestion of the Foundation’s namesake, Microwave Dave Gallaher, the Danny Hall Memorial Music Scholarship was created in memory of the accomplished local Huntsville musician, Danny Hall, who passed away in 2018.

Daniel (Danny) Thomas Hall was born in Knoxville, Tennessee, into a family that loved and embraced music.  He, along with his siblings and parents, were all musicians and formed a family band that played at local events and church singings throughout his youth.

Danny studied music at the University of Tennessee in Knoxville, where he played in marching and concert bands.  He left college to become a member of a traveling band, and that began his journey as a career musician.  In 1972, Danny moved to Huntsville, Alabama, and established himself on the music scene where he remained a significant force for 46 years.  Danny played with many local bands such as The Rock Fossils, Kozmic Mama, The Crawlers and The Brakers, as well as performing solo and duo gigs with his local musician friends.

If Danny wasn’t playing a guitar, he was working on one.  Guitarists from far and wide brought guitars to Danny, and he would gently restore them using tools of his own creation.  He was called “the guitar whisperer” by his family due to his unique process of restoration.

Gone but not forgotten,

Applications will be accepted through November 4, 2022